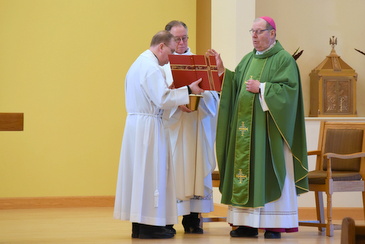 Calling it a “spectacular project and a wonderful cooperative effort,” Bishop Robert Deeley blessed and dedicated a newly constructed hall and chapel at Our Lady of the Angels Church in South Berwick on Saturday, February 8.

“There is such faith and hope in the constructing of a new building.  This new facility is the very embodiment of those virtues and the love which flows from them,” the bishop said. “A new parish center tells the community we have a purpose and we are about the mission of being a community in working together for that purpose.”

Designed by Lassel Architects of South Berwick and built by Pine Brook Construction of Kittery, the addition to the church totals approximately 4,200 square feet. It includes a connecting corridor, the chapel, the hall, a commercial kitchen, and two classrooms for religious education.

A parish hall has been a dream of parishioners ever since Our Lady of the Angels Church opened in 2012, bringing together congregations from Our Lady of Peace Church in Berwick and St. Michael Church in South Berwick, which closed.

“I was born and brought up in St. Michael and then transferred over to Our Lady, and I’m thrilled that we’re going to have a hall so we can gather together,” said Regina Carpentier of Berwick.

“It’s going to help us build that community.  It will give us opportunities to gather for different programs, along with faith formation. It will really help us implement programs to help people’s spiritual growth,” said Bill Green, parish business manager.

“That was a missing component -- a place to just gather for the celebrations of life, oftentimes with food, but something outside the worship space itself. That is something we’ve longed for, for a considerable amount of time,” said Father Scott Mower, pastor of the Parish of the Ascension of the Lord, which includes Our Lady of the Angels Church. “It really is the grace of God and the work and generosity of so many people that made it happen.  It feels like we finally put the cherry on the top with this project.”

The new hall, which is actually topped with a copper, angel weathervane, has an intricate roof system to match the adjoining church. It features a state-of-the-art heating and air conditioning system, room for a portable stage, LED lighting on dimmer switches, three-pane glass windows that overlook a field, and a 75-inch flat-screen television, which will allow parishioners to watch the Mass when there is an overflow crowd from the church.

The chapel features stained-glass windows of St. Patrick, St. Thérèse of Lisieux, and St. John the Baptist, which had been in St. Michael Church; statues of the Blessed Mother and the Risen Christ from Our Lady of Peace Church; and lighting donated by Alan and Brianne Dickinson, the parents of Father Jack Dickinson.

“It’s beautiful, beautiful. They did a really nice job with it,” said Maria Joy, a parishioner who attends daily Mass, which will soon be held in the chapel.

The chapel’s altar, which was moved to the church so that it could be used by the bishop and blessed and incensed during the Mass, was handcrafted by parishioners, as were the chapel's ambo and the table beneath the statue of the Blessed Mother. Never having made anything like an altar before, the volunteers said they visited the parish’s other chapels and modeled it after the one at the Ascension Chapel in York.

“It was a nice thing to be able to do, and it’s the pride of being able to help the Church,” said Bob Burns of Berwick, one of the volunteers.

“I put the inlays in, the Alpha and Omega.  I’ve never done anything like that before. I think that was the first time I ever used a router. They wouldn’t let me give up. They made me keep practicing until we got it, so I was very happy to see how that came out,” said Steve Trabold, another volunteer.

The same volunteers also had a hand in the installation of the stained-glass windows in the chapel and in the church, which were also sprinkled with holy water and blessed by the bishop during the Mass.  The windows, which date back to the 1930s and early 1940s, came from St. Michael Church and had been placed in storage when the church closed. Last spring, Bill Green approached Ken Krebs, the sexton, about helping with the windows. Ken then recruited Maurice Cote and Bob Burns, with Steve Trabold coming on board later.

The project started slowly since there was a learning curve, but from August to November, the men spent two hours every Monday - Thursday morning cleaning the windows and applying patina to them.

“I thought I was just going to put them in, but then, I ended up sanding and painting and restoring and cleaning,” said Steve, with a smile. “It was a great project.”

Among the hurdles the group faced, figuring out how to install the windows. Although Our Lady of the Angels Church was built to accommodate them, it turned out that they couldn't be inserted the same way, because they used to be on the exterior and now would be on the interior.  The answer was an H-bar system designed by Ken.

“You put the first window in, and then, an aluminum H-bar would fit on top of that, and the next one would fit in the groove on the top of the H,” explains Bob. “A little father and son machine shop in Portsmouth made them for us.”

There are many who had a hand in the enhancements to Our Lady of the Angels.  Planning for the projects stretches back years, starting under the leadership of Father John Skehan, pastor when the church was built, and continuing under the guidance of Father Mower.

“It looks like the whole building was built together, at the same time, and that is what we were really striving for. I can’t speak highly enough about the whole team. I truly mean that,” Father Mower said.

“As we come together, it is very appropriate that we lift up in our prayer today in this Mass of thanksgiving all of those who have worked so diligently to plan and guide this project -- all those of the parish and friends of the parish who, through incredible generosity, have made it possible for this community to build this beautiful facility, a completion of a project to create a new center of faith for the community of Our Lady of the Angels in South Berwick and for the Parish of the Ascension. It is a singular achievement and a wonderful grace,” the bishop said during the Mass.

The Parish of the Ascension of the Lord launched a capital campaign just over a year ago with the goal of raising $1.5 million, not only for the addition to Our Lady of the Angels but also for restoration work and upgrades at St. Christopher Church in York, St. Raphael Church in Kittery, and Star of the Sea Church in York Beach.  Just over $1.2 million has been pledged so far.

“We are so grateful for the generosity of parishioners and community members in offering this assistance to ensure a sustainable future for our churches and better pastoral care for our community of faith,” said Father Mower.

The blessing and dedication of the parish hall in South Berwick was a true parish-wide celebration with members of the churches in Kittery and York attending and contributing food and flowers for the reception that followed the Mass.

Parishioners who worship at Our Lady of the Angels Church hope that celebratory gathering was just the first of many to come. Most especially, they are looking forward to the return of the turkey suppers that used to draw people from miles around to Our Lady of Peace Church each month.  Carole Stacewicz, who was helping out in the kitchen for the reception, said she volunteered at those suppers for more than 15 years.

“We’ve missed it terribly,” she said. “It brought all the parish together. Everybody from other towns used to come. The word spread through many, many towns, and we just enjoyed being together and working together.”

She said they have to bring the old team back together and recruit some new volunteers, but you can anticipate the first dinner in the fall.