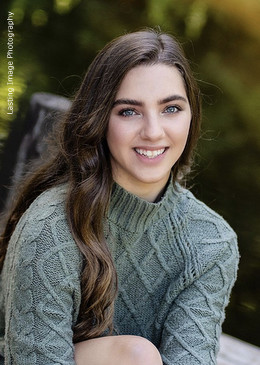 Two students who say they believe in the value of hard work and in the importance of sharing their gifts with others have been named the winners of the 2021 Lila Grace Sullivan Amirault Scholarships.

Lauren Theriault, a senior at Saint Dominic Academy in Auburn, and Logan Granger, a senior at Cheverus High School in Portland, will each receive $5,000 to put towards their college tuition.

“I was surprised, but I was so excited,” said Lauren, who is from Minot.

“I know quite a few people put in for it, so I was pretty thrilled to get it,” said Logan, a Scarborough resident.

The scholarship was established by Patrick Amirault through the Catholic Foundation of Maine in 2013. Amirault wanted to honor the memory of his wife, Lila, and also to show his gratitude for the care and education he received at a Catholic school in Malden, Mass., where he grew up as one of nine children in a poor family. Although Amirault is now also deceased, the scholarship continues to benefit Maine Catholic high school seniors like Lauren and Logan.

“It will go a long way in helping me pay for college,” said Logan. “I am very proud and interested in my faith, which led me to this scholarship.”

Although Logan hasn’t made his college choice yet, he is leaning towards attending Sacred Heart University in Fairfield, Connecticut, saying he is eyeing a Catholic college because of the positive experience he had at Cheverus.

“I really enjoyed and was able to benefit greatly from attending a Catholic high school, and I hope to get the same out of college,” he said. 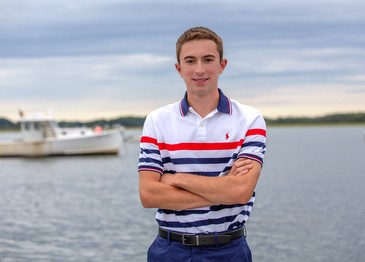 Logan said that attending Cheverus and the retreats the school offers have helped him to grow in his faith, something he said he wasn’t thinking much about when he arrived there for his freshman year.

“As I went on my freshman retreat, it was not only a good time to meet my fellow classmates, but it also opened the door to what I really want to look for in God. And I just recently went on the Kairos retreat, which is the senior retreat, three days long, and it really just kind of transforms you,” he said. “It really kind of helped put my love for God into practice through my everyday life.”

That includes his service as a volunteer firefighter for the Scarborough Fire Department. While responding to fires and motor vehicle accidents can be difficult, Logan said he has seen the presence of God in those with whom he serves, as well as in the acts of strangers who have gone out of their way to help others.

“It’s just stuff like that that really helps me see the love in the world,” he said. “I have a really good group of people who I get to work with. I consider a lot of them to be mentors to me, and that’s just another example of how you can really find true love and compassion in the people who serve the community.” 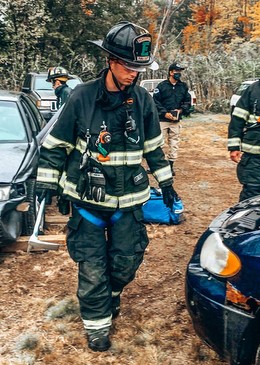 He said it is his experiences as a volunteer firefighter, along with a Zoom call with a surgeon from Maine Medical Center in Portland, that led to his desire to become a cardiac surgeon. He plans to major in biology in college and then attend medical school.

“I really learned how much I love working with people and being there for people when they’re at their worst,” he said.

Logan said he believes in the importance of working hard to achieve your goals.

“I have extreme pride in my work and strongly believe in values such as dignity, attitude, and trust. These are rooted in my faith and upbringing,” he said.

A strong work ethic is something that Lauren also stresses.

“Work ethic not only applies to school or your job but to all aspects of life. It is important to have a strong work ethic in order to be both successful and happy. In relationships, you have to be willing to work hard and sacrifice. This also pertains to faith life. You have to put time and effort into your relationship with God and be willing to sacrifice personal needs and desires for him,” she said.

Like Logan, Lauren said her freshman year of high school was a turning point in her faith life.

“I’ve always been pretty serious about my faith life, but then, freshman year, I decided that, yes, I want God to be a part of my life,” she said. “I started to get into it more and started going to church more and outside activities, and that’s when I decided that that’s what I wanted.”

It led her to become one of the assistant chaplains at Saint Dominic Academy, which has meant serving as an extraordinary minister of holy Communion at Mass and helping to guide fellow students in the faith.

“It’s been amazing. You grow so much personally, but also, you help others grow,” she said. 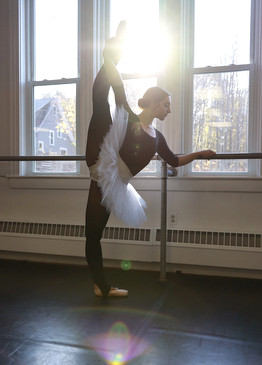 Lauren plans to attend Texas Christian University in Fort Worth, where she was accepted into the dance program.

“I’ve been taking dance classes since I was three years old. I’m not really sure how I got into it. I just know I was dancing around the house all the time, so my parents were like, yeah, she needs to go into classes,” she said. “I do all types of dancing, but my favorite is definitely ballet. I just really like the structure of it. It not only gives me something to do physically, but it’s artistic, too.”

Lauren hopes to someday become a member of a professional dance company, preferably a ballet company.

Both Lauren and Logan have been active in their schools and in service work.  Lauren is a student ambassador, a class officer, and a member of the Student Senate, the National Honor Society, and the Key Club.  She is also a teaching assistant at the dance center she attends and has volunteered at community events such as the Great Falls Balloon Festival and Greek Festival in Lewiston, as well as for the Mid Coast Hunger Prevention Program in Brunswick.

“It’s rewarding to see how every little thing helps,” she said.

In addition to volunteering with the Scarborough Fire Department, Logan is a member of the Spanish Club and Key Club at Cheverus, both of which engage in service work. The Key Club is known for organizing the school’s Turkey Drive, which feeds hundreds of families each Thanksgiving, including during this past year, despite the challenges of the pandemic. Logan will also be volunteering at the Riding to the Top Therapeutic Riding Center in Windham in May.

“I definitely grew up in a family of service. My dad was a state trooper for 29 years, and I would say he, along with my mom, inspired me to really love people,” Logan said.

Logan is also a member of Cheverus’ baseball and golf teams.

Logan and Lauren said attending Cheverus and St. Dom’s, respectively, has left them well prepared for the future.

“If I had to do it again, I couldn’t ask for a better group of mentors, whether it be the teachers, the coaches, all the way up,” said Logan.

“I’ve been going to St. Dom’s since pre-K, so I’ve been here the whole time. It’s been amazing,” said Lauren. “I absolutely love it.”

The Amirault Scholarship Endowment was established through the Catholic Foundation of Maine, which provides opportunities for people to create or contribute to charitable funds that enhance the work of the Church in Maine. If you would like to learn more about you can create a lasting legacy like the one left by Patrick Amirault, please contact Executive Director Elizabeth Badger at (207) 321-7820 or elizabeth.badger@portlanddiocese.org. For more information, you can also visit the foundation’s website.