All in the Family at All Saints 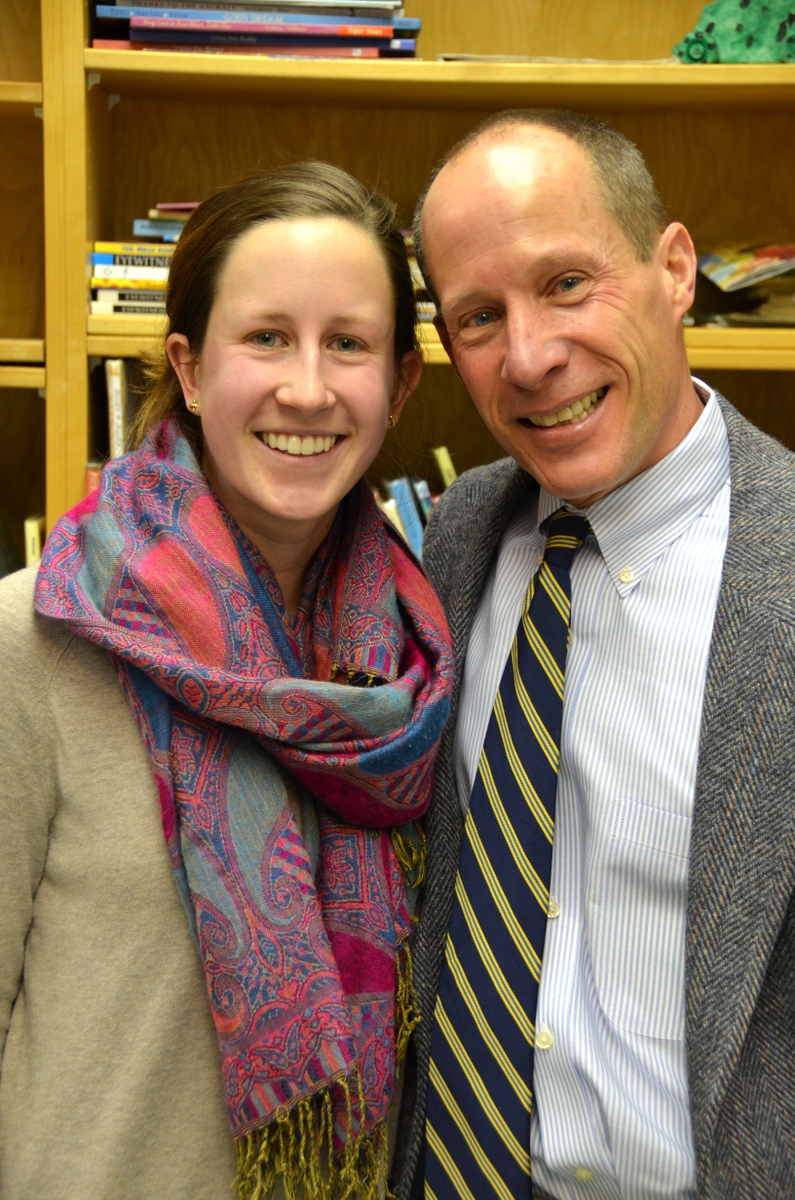 “It’s only been six months, but it’s been incredible.”

When Rachel Huber was offered the second-grade teaching position at All Saints Catholic School in Bangor, she didn’t hesitate.

“For me, it was a no-brainer,” she says.  “Ever since I went to college, I had my plans set that my dream would be to come back to All Saints.”

That is because the school has been a beloved part of Rachel’s life since she walked in the doors as a kindergarten student 18 years ago.  She attended All Saints through the eighth grade, volunteered at the school during her college breaks, and her father has been coaching cross-country and track at the school since Rachel was on one of the teams.

Rachel says she saw teaching at the school as a way to give back to the community which has given her so much.

“I had such a great experience that I want to make sure these kids get the same experience I did,” she says.

Her father couldn’t be more pleased with her choice.

“When Rachel said she was going to be a teacher, I thought about all that I have gotten from coaching,” he says. “As I’ve watched over the course of the last few months, she certainly invests herself in her children and in their families. That’s what I’ve tried to do, and it has paid dividends beyond my wildest imagination.”

“My experience, and certainly Rachel’s experience, is that this is it. It’s All Saints. It’s this parish (St. Paul the Apostle). They have done such a wonderful job of creating a safe environment, a loving environment, a place where kids can learn and thrive and feel comfortable,” says Roger Huber. “All Saints has a very soft spot for all of us.” 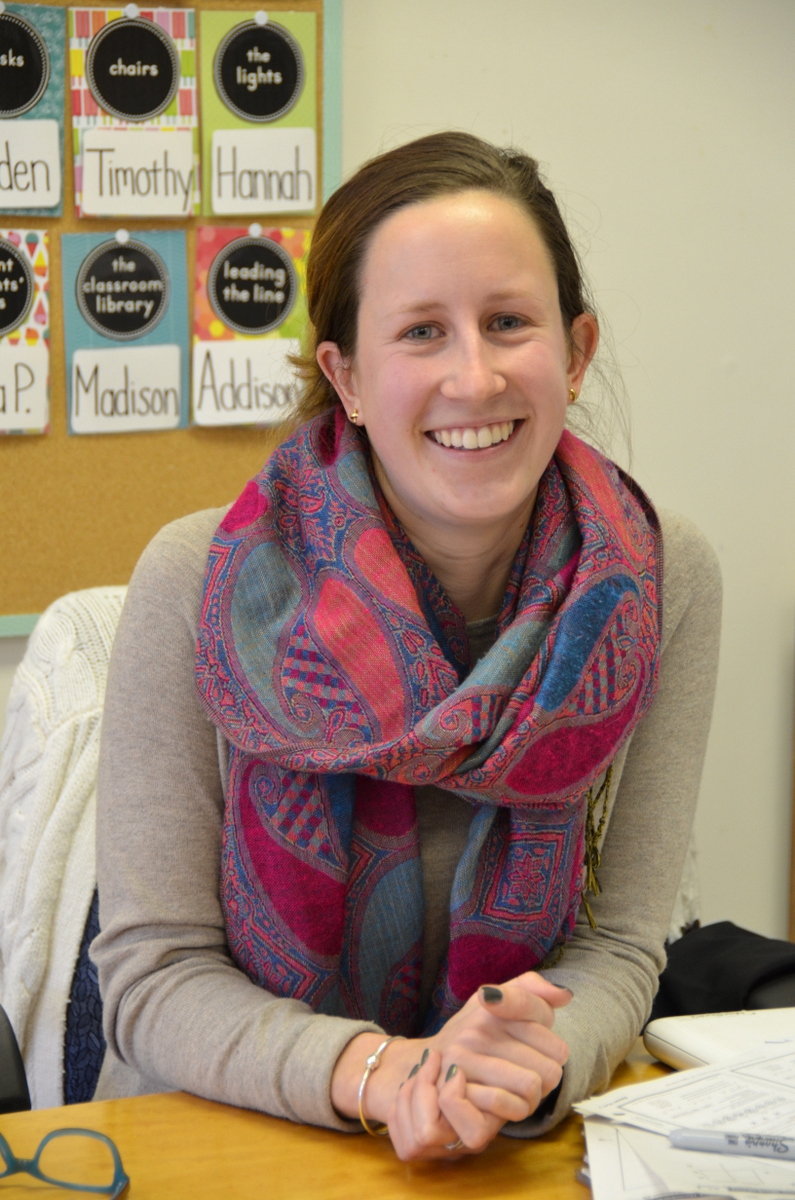 Rachel recalls that when she was a student she didn’t have a handful of friends but a classroom full of them, some with whom she still keeps in contact. Now a teacher, she has discovered a similar camaraderie.

“It’s a very close-knit community,” she says. “I think the teachers here have a lot closer bond than some other schools. Everyone here is very personable, very willing to help the other teachers, especially me being the new teacher.  They have all been so helpful.”

That includes the woman whose classroom she took over, her own former second-grade teacher, Maureen Teixeira, or “Mrs. T” as Rachel still calls her.

“I walked into the classroom the first day after I got my key, and the supply closet was full. And she had left sticky notes for me, and she had binders with all the photocopy sheets already copied from the workbook.”

Rachel says she received a similar welcome from the students’ parents.

“All of my parents have told me, if you need anything, email us, we’ll come in.  Some parents, when they have days off, have offered to come in either to do activities with them or help with any lessons that I’m doing. It’s great to have that.”

“I would say the same with cross-country, even if you don’t call, you know that that you could call,” says her father. “They’re just looking for an opportunity to participate.”

Rachel admits there have been some adjustments now that she is viewing things from a teacher’s perspective.

“It’s kind of funny to see, ‘Wow, was this what I was like in second grade?’  she says. “It’s a lot different than I envisioned.  I didn’t think this would be as hard when I was a kid.”

But, she is embracing the opportunity.

“It’s a really great grade. These kids still want to make you happy and still want to impress you, but they’re also a lot more independent.”

She recalls looking forward to the two-week Christmas vacation, only to discover midway through how much she missed her students.

“The aftercare program was open downstairs for parents who needed to leave their kids, and I didn’t sign up for any shifts thinking, ‘No, I’m going to need these two weeks to rest up.’ And, after the first week at home…I was texting people asking them if I could cover their shifts because I wanted to come in. I didn’t realize how much I missed seeing them every day.” 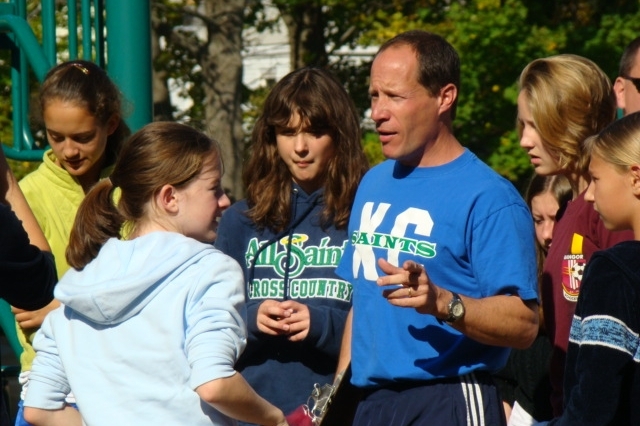 Roger Huber feels a similar attachment to the students he coaches.

“I’ve always wondered how teachers can get a class and invest themselves in a class and then just let them go. I have a very difficult time letting go of my kids,” he says. “Most of them are kind enough to include me in their lives through high school and then on through college and beyond.”

“They love seeing Coach Huber cheering them on and still supporting them,” says Principal Joseph Gallant. “If you could see Roger with the kids, he makes each one of them, regardless of their level of ability, feel special and important, and they love him.”

Gallant points to a friendly competition that Coach Huber started, “The Biggest Loser.” The student who shaves the most off his or her race time gets a trophy to keep for a week.

“The kids love it,” Gallant says. “I think they like that better than finishing first.”

Gallant says that Coach Huber has promoted a wonderful sense of teamwork among the students.

“Another beautiful trademark of Roger, and evidence of what he has instilled in the kids, is that they always, at the end of a race, are cheering everybody on, not just their teammate but the kids from the other teams,” Gallant says. “I get compliments.”

Gallant recalls the time one of the team’s best athletes stopped to help a runner who had fallen down.

“She just wanted to do the right thing by helping her,” he says. “She probably would have finished in the top five or even won, but she stopped. When you hear stories like that, it’s hard not to get emotional.”

Roger says the credit goes to those who have guided the students up through the fifth grade, the first grade level eligible to compete.  He speaks, however, with pride about the student athletes.

“I think one of the neatest, probably ‘the’ neatest thing, and Rachel can attest to this, when I come home and tell stories about practice or a meet, it’s rarely about running. It’s always about something that the kids did or a kid did.  This age group and these kids from this school, shepherded by these teachers, are not afraid to show their faith.”

That includes praying before races, a practice he says the students started on their own.

“Several years ago, I had a runner, she was the captain, and I asked her to say something to the team before the big race. I said my spiel at the starting line and said, ‘O.k., they’re yours,’ and I walked away,” he recalls. “Later, I asked one of the parents, ‘Can you ask your daughter what Elizabeth said?’ And she told me that she said the ‘Hail Mary,’ and from that point on, both the boys’ team and the girls’ team will put their arms around each other at the start of every single race and say the ‘Hail Mary.’”

Huber credits the students with teaching him an important lesson that day.

“I always thought it was my job as a coach in a Catholic school to encourage them to say a prayer and to somehow at least give thanks for the opportunity to be there, and I never quite had the personal courage to do that. Maybe I was afraid of how it would be received. Then, I have these kids, 12 -13 years old when they should be the most self-conscious, showing me up and doing exactly what I should have been doing all along. I’ve grown because of it.  I’m still not particularly good at it, but I can, in my own way, sort of foster that, and I feel that has sort of been my calling.”

Referencing a book by Father Robert Barron, Roger Huber says he looks at the day he was asked to coach as the day Jesus stepped into his boat.

“Every year at our banquet, I say thank you to Gene Kasper (the former coach) for that gift, that phone call,” he says. “My important friendships, most of them, came right through cross-country and through school. That’s how I get to be a fisher of men.”

Roger Huber says All Saints provides a safe and supportive environment for children to grow in their faith and says he has found that the values instilled at the school aren’t lost once the students move on.

“I’ve watched all my runners after they’ve graduated. They’re still the same kids after four years of high school,” he says. “They just have this solid, faithful foundation that carries with them.” 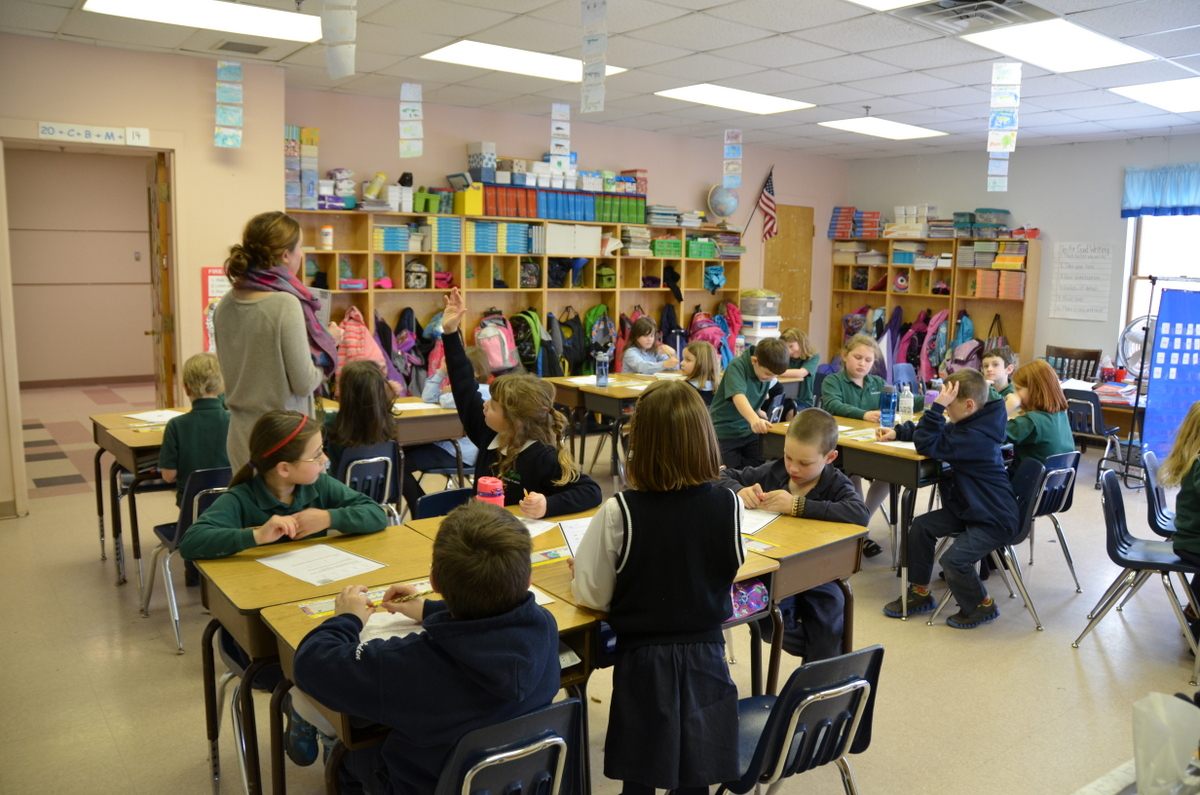 Rachel says she was perhaps the most nervous about teaching religion, knowing the second grade teacher has the responsibility for preparing children for first Communion and confirmation. She says, however, it turned out to be one of her favorite subjects to teach.

“Some of the conversations that those second graders have, I’m impressed. They have good questions. They enjoy learning about it. They pay attention to it and share it with their friends.”

She says teaching the faith has also given her a chance to relearn some of the lessons of her youth, something her father couldn’t be more pleased to hear.

“You pray that your kids will grow up and be faithful Christians and Catholics,” he says. “And one of my prayers has been answered having Rachel here. You can’t teach the sacraments and not grow in them.”

When Roger Huber speaks about his daughter Rachel, it is with a father’s love and pride.

“I can’t think of a much higher calling than teaching,” he says. “Rachel and I are very much alike, and I know that, paycheck aside, she will grow from teaching and will thrive in it.” 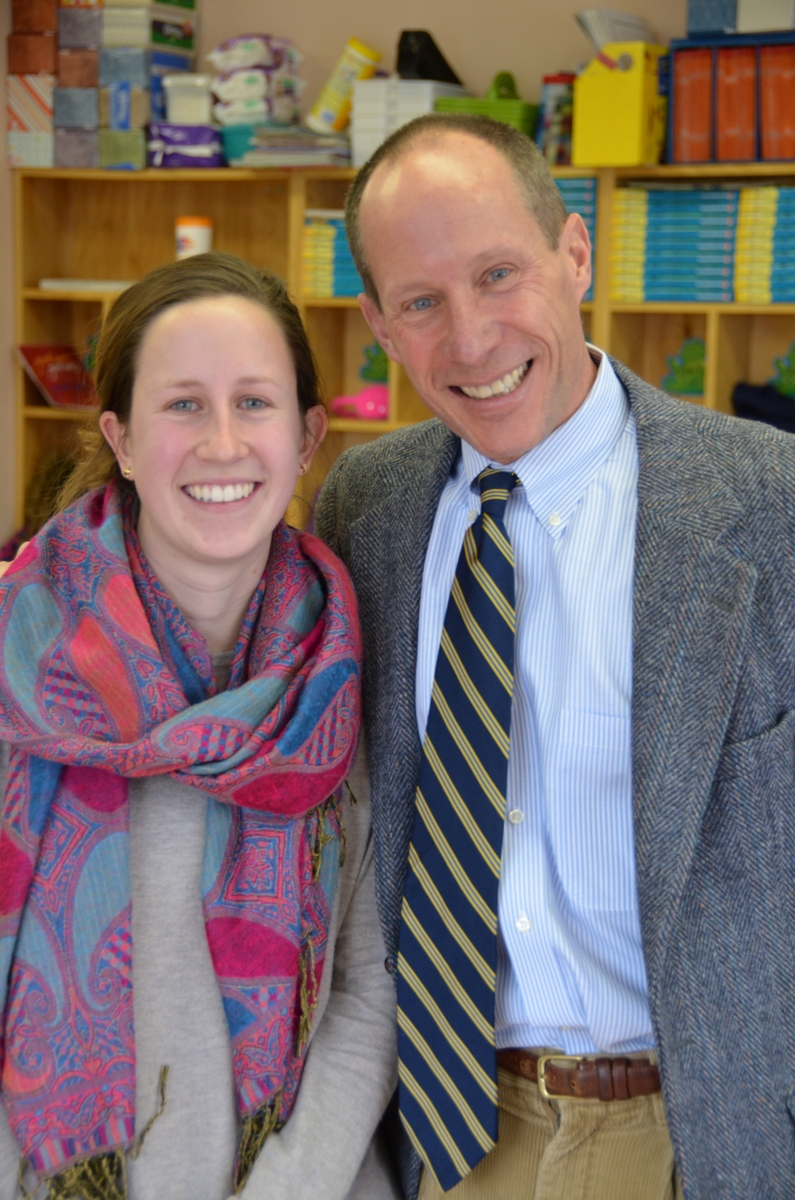 Rachel’s love for her dad also shines through. Even though their paths don’t often cross during the school day, she says she loves that they both work at All Saints.

“It’s nice for me,” she says. “To see parents and have them tell me how great my dad is -- they’re always telling me how great he is with their kids. I see that at home all the time, but it’s nice that other people see it, too.”

A lawyer by profession, Roger Huber doesn’t receive a paycheck for his coaching work.  He says, however, that he is well-compensated for it.

“This is, sort of, my favorite thing to do, I leave [work] at two o’clock in the spring and fall. I make my schedule so that’s a possibility, and it’s what I look forward to every day,” he says. “As much as I love practicing law, there is just something intrinsically valuable and enjoyable and rewarding about working with these kids.  It is an absolute priority.”

Principal Gallant says All Saints School is lucky to have such a committed dad and daughter.

“It’s nice to see such a nice family,” he says. “I know there are other Catholic schools who have people like the Hubers. We’re all very fortunate to have a Huber around.”