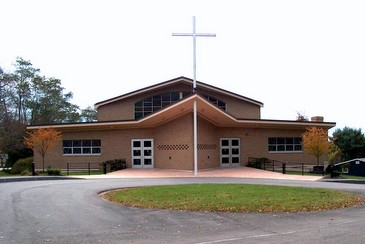 The Parish of the Ascension of the Lord is celebrating the golden anniversary of one of its churches. Fifty years ago, on July 15, 1970, St. Christopher Church in York was dedicated by Bishop Peter Gerety.

The church was designed by John D’Orsi of Boston, whose son still attends the church today. The architecture was meant to bring to mind the image of a ship, reflecting the character of the seaside community.

The church’s stained-glass windows were created by the Francesco Ruocco Studios of Merrimac, Massachusetts.  Ruocco had studied at the school of the Boston Museum of Fine Arts, as well as the University of Rome. The windows depict the Annunciation, the Nativity, the scourging, the crucifixion, the ascension, Pentecost, and the Crowning of Mary in heaven, with one section dedicated to scenes from Genesis. 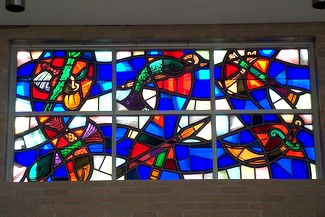 An article written for Church World at the time of the dedication explains, “When Father (Leo) White and Mr. Ruocco first discussed the windows, the astronauts had made history by reading the first chapter of Genesis from outer space.  It was decided that the theme for the main windows should be the Profession of Faith.  Four of them are impressionistic, those we call the Genesis windows; six are traditional.”

Among the striking features of the church is a marble sanctuary with a 14-foot high figure of the Risen Christ. It was designed by Castle Studios of Florence, Italy, as were the Stations of the Cross.

Although the current St. Christopher Church is only a half century old, Catholic Masses began being celebrated in the Yorks as far back as 1895. At that time, Masses were held for summer visitors at the Sea Urchin Bath House (Mason Estate), then the York Harbor Library, and finally in the hall of a local hotel.  In York Beach, Masses were celebrated at Clements Hall (later known as the Algonquin Hotel) beginning in 1896. 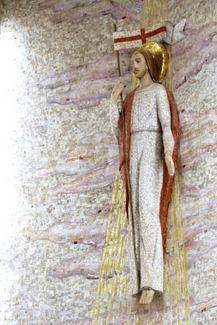 In 1901, the faithful finally got a church in which to worship when Star of the Sea was built in York Beach. Two years later, Immaculate Conception Church in York Harbor followed. Both were summer missions of St. Michael Parish in South Berwick, which was the first church built in the area following the division of Maine and New Hampshire into separate dioceses.

“When Maine and New Hampshire were one diocese, the Catholic church ended up being on the New Hampshire side of the Piscataqua River in Dover, New Hampshire, and it fed this whole region. When the diocese split…there weren’t any churches on this side, and there were precious few on the other side of the river. So, the first one that went up was St. Michael in South Berwick, and the priests from St. Michael’s used to come down on the trolley to minister to the community here,” explains Father Scott Mower, pastor of the Parish of the Ascension of the Lord.

With the rise of more parishes, the York churches would then become summer missions of St. Raphael in Kittery, and later, Star of the Sea would become affiliated with St. Matthew Parish in Limerick.

The roots of St. Christopher Church go back to 1946, when the diocese purchased the Murray Lodge (a former Victorian inn) on the corner of York Street and Barrell Lane in York. After originally celebrating Masses in a reception area, the inn's garage, originally a stable, was converted into a chapel, which was given the name St. Christopher-by-the-Sea. The first Mass was celebrated there on Christmas Eve 1947 by Father Henry Sloan.

“In his sermon, he remarked that the windowsill in the tiny sacristy still bore the marks of where horses had gnawed on them.  It was really Christmas that year – Bethlehem, a stable, and the Son of God made man on the altar of their very own chapel,” wrote Norma Burton Stone in Church World.

St. Christopher-by-the-Sea was the first year-round Catholic church in the Yorks.

In 1962, the three mission churches in the Yorks became part of the newly established St. Christopher Parish.  A year later, the little chapel in York was torn down, but it wouldn’t be long before the larger, more modern St. Christopher Church would rise in its place, thanks to the hard work of a committed congregation.

“St. Christopher is a very unique church community. It has a strong core of year-round people who are very dedicated to the parish, but then, throughout the year, we have lots of seasonal people that come and join us who are equally committed to share in the mission of this community,” says Father Mower. 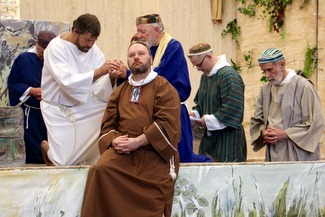 One of the signature events held at St. Christopher is the Lenten production “To God be the Glory.” With a cast and crew of over 100, many of them St. Christopher parishioners, “To God be the Glory” tells the story of Jesus’ life from the Annunciation to the resurrection.  It had been held every year for 26 years, until being forced to cancel this year due to the COVID-19 pandemic.

In 2011, St. Christopher reunited with the Catholic communities of Kittery and South Berwick, all three becoming part of the Parish of the Ascension of the Lord.

Just two years ago, St. Christopher added a separate chapel.  Located in a former bank building across the street from the church, the Ascension Chapel was blessed and dedicated by Bishop Robert Deeley in January 2018.