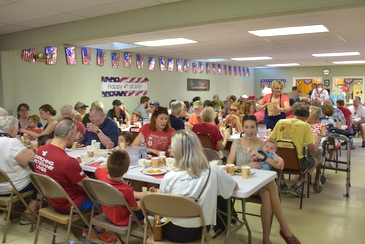 Hundreds of people got their Fourth of July celebrations off to a hearty start at the all-you-can-eat pancake breakfast hosted by St. Jude Church in Freeport.

“It’s excellent. The food is delicious, and I didn’t have to cook it,” said Gayle Sulzberger, Bill’s wife.

St. Jude Church, part of the Parish of the Holy Eucharist, has hosted the pancake breakfast for 27 years, drawing people from miles around.  Nearly 700 people attend each year, and volunteers said this year’s breakfast was shaping up to be one of the best. Every table in the parish hall was filled throughout the three-hour event.

“People come here, and they say they meet here once a year. It’s lovely,” said Jane Weiland, one of the organizers.

“It’s just wonderful, everybody getting together and working together. It’s a community effort,” said Jane Bastey, who enjoyed blueberry pancakes and had earlier helped to decorate the hall.

It takes approximately 60 volunteers to put on the breakfast. That includes the ticket sellers, the cooks, the servers, and those clearing tables and washing silverware.  Many of the volunteers have helped out for years, some since it started.

“This is my 26th year. I missed one year,” said Tom Peacock, a parishioner and volunteer. “It’s community. We have a lot of fun. We joke around here, and we raise money.  What more fun can you have?”

“I’ve been in the parish for five years, and all five years, I’ve been out here working and have been involved in the pancake breakfast,” said Mike Crowley, while flipping pancakes. “It’s a community-based parish. There is so much love in the parish. You just feel it, and you want to be involved.”

“I like volunteering because it’s a good way to help out the community, and it makes you feel good about yourself,” said Ella Emery, age 14, who has been volunteering with her father and brother for several years. “People appreciate what you do all the time. They thank you so much.”

“I just love helping people. I get a good feeling when I come out and do stuff like this,” said Eric Emery, Ella’s father. “It brings people together.”

The breakfast is held in the hall of St. Jude Church, located at the intersection of Main and School streets in Freeport’s bustling shopping district. It is the event that kicks off the town’s daylong Fourth of July celebration. Events also include the L.L. Bean Fourth of July 10K or 1-Mile Family Fun Run/Walk, the town’s Fourth of July parade, which steps off just as the breakfast is wrapping up, L.L. Bean's Summer in the Park Concert Series, and fireworks.

“Year after year, people come here from the race. They go up to the parade right after. It just fits into the groove of their tradition,” said Weiland.

“It’s not just St. Jude; it’s what we are in the community,” said Georgette Dionne, the parish's director of lifelong faith formation and one of the volunteer servers.

Patrons have a choice of plain, blueberry, or recently added chocolate chip pancakes, but those manning the grills will tell you there’s no doubt which are the most popular.

We are in Maine after all.

Sausages and baked beans were also served, along with milk, coffee, and juice.

There was also a little summer heat on the menu, but even those manning the grills didn’t seem to mind.

“It’s a good time. It’s a lot of fun,” said Bruce White, who was busily making pancakes. “There is a lot of camaraderie here, a lot of joking back and forth.”

“It’s great to be with the guys, and it’s good for parish,” said Marc Held, who was cooking the sausages.

“I think it’s important. We have a very strong parish family here, and it’s a fun thing to do,” said Gaye White, one of the servers.

“This is amazing,” said Father Phil Tracy, the newly appointed pastor, who was happily collecting tickets and chatting with patrons. “It’s just so organized. The volunteers are plenty. The people are friendly. I think it’s a good service for our parish to be such a part of the Fourth.”

The breakfast's place in the town's celebration was evident by the support it received.  Bow Street Market donated the orange juice.  Coffee by Design in Freeport donated the coffee. The orange juice came from Bow Street Market.  B & M Beans donated the beans. McDonalds in Freeport donated the creamers, the butter, and the syrup.  Other donations, including some financial assistance, came from Domino's Pizza, The Harraseeket Inn, Derosier's Market, Lobster Cooker, Fiori's Oils, Petrillo's, China Rose, and Brickyard Hollow.

Proceeds from the breakfast will go to support the parish and St. Jude Church, which is looking to buy a ne stove and refrigerator for the kitchen.

The Parish of the Holy Eucharist has another community fundraiser coming up later this month.  Those heading to the Yarmouth Clam Festival from July 19-21 are invited to stop by Sacred Heart Church, where you can enjoy a hamburger, chips, and a beverage for $5.  The parish will also have a booth in the festival’s food circle where fresh fruit cups and cotton candy will be sold.