Bearing witness to the love of God 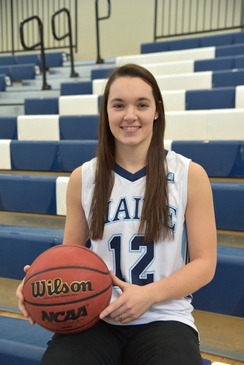 Parise Rossignol, a shooting guard for the University of Maine Women’s Basketball team, has long held a love for the game.

It’s also something at which she excels, dating back to her time at Van Buren High School, when she led the state in scoring all four years, ending her career with 2,589 points, the second most in Maine history.

As much as Parise strives for excellence on the court, however, she says there is something that drives her even more – her love for God.

“I love God and just do my best to live out my faith every single day,” she says.

Faith has always been an important part of Parise’s life, but she admits there was a time when basketball often took priority.  She says it took a setback for her to realize that her true identity was as a servant of Christ, rather than a star on the court.

“No matter what you do, your value doesn’t come from what you do; it comes from who you are,” she says. “My main calling is to be a disciple who helps lead others to Christ.”

Parise credits her parents’ and grandparents’ example for her strong Catholic faith. She says she had many blessings in her life while growing up in Van Buren, which made it easy for her to believe she was loved by God.

“My idea of God during this time was that God is awesome because I have all these awesome things. I have an awesome family. I’m good in sports. I’m good in school. I have awesome friends. I was like, God must really love me because look at all these good things,” she says.

The good times continued to roll when, during her sophomore year in high school, she was offered a scholarship to play basketball for the University of Maine. She calls it a dream come true. 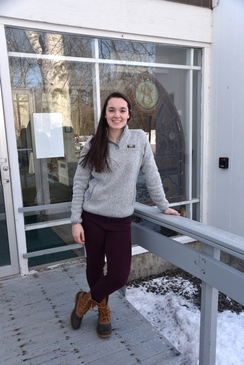 “My dad played basketball here, so growing up, I wanted to be just like him. I wanted to come play here,” she says.

With such outstanding high school basketball credentials, expectations for Parise were high, but the team she was joining had many veteran players and she, unexpectedly, ended up on the bench.  With so much of her life centered on the sport, it was a tough adjustment to make.

“In my entire life, I was used to being the one, so it was humbling for me but also very difficult,” she says.  “Up to that point, I had placed a lot of my identity on being really good at basketball. I got a lot attention for it, so it was easy to put my identity into that.”

Struggling to find her way, Parise received some welcome guidance from Tracy Guerrette, director of women's basketball operations for the university at the time. Tracy is a former player and also a devout Catholic, currently serving as faith formation director at St. Paul the Apostle Parish in Bangor.

“As a basketball player, you want to come in and you want your purpose to be: I want to play a lot and help my team. But, she helped me find a deeper meaning,” explains Parise. “For example, if we had practice, if there was a hard workout, she would teach me how to offer up that workout and that suffering as a prayer for someone specific on my team. Each week, we would focus on one player on my team, and she and I would offer up our entire week, every workout for that teammate.”

While that helped Parise persevere, she says the limited playing time was still making it difficult for her to feel a sense of purpose. Then, one day, after a particularly poor practice, her best friend, whom she had met through campus ministry, invited Parise to join her for eucharistic adoration at the Newman Center.  Although she describes herself as being in a horrible mood at the time, Parise decided to go.  While there, she had what she describes as a “big aha moment.”

“I was kneeling there, and I remember just looking at Jesus Himself and thinking, ‘I’m in a bad mood right now because today I wasn’t good at putting an orange ball into a metal rim. I’m letting that affect how I view myself when, literally, the Creator of the Universe is right here looking at me. It’s crazy,’” she says. “That kind of flipped the switch in me and made me ask a question: ‘What am I going to base my identity in?’ So, I definitely took that mindset moving forward.”

She says she became very intentional about finding meaning in whatever she did in basketball, keeping a journal, and writing down for whom she would be practicing and praying.  While she found deep joy in that, at the same time, she says she was not happy as a player. She decided turned to God for guidance, asking her friends to pray for her as well.

“I had so many people praying for me,” she says. “It was an awesome group effort.”

The answer she received pointed her in a direction she could never have imagined going just two years earlier. 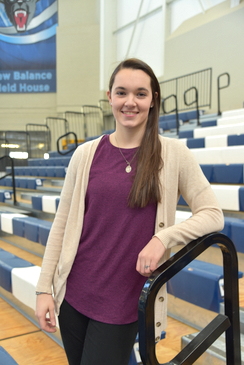 “I just really felt the overwhelming call that I should leave, so I made the hardest decision I ever had to make, and I walked into my coach’s office, and I gave up my dream. I told him that I was leaving the team. I relinquished my scholarship,” she says.

The decision, she says, was particularly hard because of those high expectations.  Still, she, with her family firmly behind her, knew it was the right choice.

“I feel like, when you take these big decisions to prayer, God is not going to lead you where He doesn’t want you to be at that time, so I felt confident in that,” she says. “Knowing that doesn’t mean it was easy. It was still difficult.”

The year off, however, opened up new opportunities for Parise, including the chance to attend an annual, national gathering of Catholic college students, which was held in San Antonio that year.

It also turned out to be a year of personal challenges that would have made playing basketball difficult. Her grandfather, with whom she had been very close, died, the first time she had experienced such a loss.

During the basketball season, she also suffered a ruptured appendix, which left her in the hospital for a week and in recovery even longer.

As she had done when she was making her decision about leaving the team, she turned to prayer and a favorite Bible verse, Romans 8:28.

“God works everything out for the good for those who love Him. I prayed with that a lot,” she says. “That verse just kind of carried me through that year, just trusting that if I love God and just do my best to live out my faith every single day and trust in Him and go to Him in prayer, He’s going to work it out for me,” she says. “It’s His plan, even if it doesn’t make sense at the time.”

Towards the end of the year, Parise again started to feel a pull to play basketball.  Viewing her chances of returning to the UMaine team as remote, she looked into transferring to another college.   However, after she requested a release from the program, she was taken by surprise when the new, interim coach invited her back.

“She said, ‘I just want you to know that I’m going to be coaching next year, and I would love to have you on my team if you want to play for us again,’” Parise recalls. “It was such a shock. It really was.” 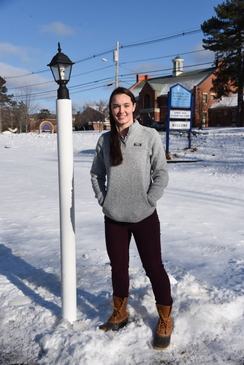 Most importantly, Parise says she is once again happy playing basketball.

“When I came back, I took the pressure off myself and saw the bigger picture.  I found so much joy in the process. I realized how special this opportunity is and I realized that God has led me here.  So, I’m just going to work hard every day to be the best basketball player that I can be,” she says.

But as committed as she is to doing her best while on the court, she says she now understands that she has a greater purpose that extends beyond it.

“I’ve realized that being a good player is part of my calling, but the absolute main thing that I am called to do is to live in such a way that my life serves as an arrow that can help point my teammates to Christ. That’s my main mission every day,” she says.

Parise says she does that by makng sure her teammates know that her joy comes from her relationship with Christ and by following Jesus’ example and loving and support them.

“Sometimes, I think people think that sharing Christ is going, ‘Hey, do you want to talk about Jesus?’ For some people, maybe that is how you can do it.  Some people are willing to have conversations like that, but for others, it’s just loving on them,” she says. “I want to be known as the teammate whom anyone one can talk to and never feel judged.”

Parise says she particularly tries to reach out to players who may be struggling.

“I kind of help guide them, help them know that if you’re not playing well right now or you’re not doing as well as you would like to, that doesn’t change your value,” she says.

She says she tries to put others’ needs first, even in little ways, such as going to the end of the line at pregame meals, knowing it will mean missing out on the best parts of the salad.

“Unlike the athletic side of it where a lot of times you see the fruits of your labor – you become better, you play better – I might not see the fruits of the seeds of faith that I’ve planted in my teammates, but God is calling me to at least plant them and then offer it up to Him.  And pray for them.  That’s what I’ve come to realize over my years playing here, and it’s been pretty awesome,” she says. “It’s important to live our faith for ourselves, but we’re not meant to keep it to ourselves. We’re meant to share it with others.”

That is why Parise has shared her story with different groups, including speaking to teens during Theology at Tim’s, a youth ministry gathering in Aroostook County.   She says she wants others to discover what she has.

“When I speak, I speak about your identity in Christ, just being rooted in the fact that you are a child of God,” she says. “I love being able to share my story with others, because I think it’s something that a lot of people can relate to, not only in an athletic sense. Some people put their identity in other things, for instance if you’re good at music or just anything, like your job. A lot of people probably struggle with that, so I love being able to share how God has led me on my journey through the good and the bad to where I am now.”

Parise is in her final year of playing collegiate basketball. She has already received her bachelor’s degree in secondary education and is now studying for her master’s. While she’s not sure where her life will be headed next, she says she will follow whatever path God lays out for her.

“I think this experience has prepared me for the rest of my life,” she says. “Moving forward, I’m sure there are going to be tough times, but I know that God loves me and will guide me through that. Whether I’m on the mountaintop or I’m down in the valley, He is going to lead me.”