Looking forward to a future together with Christ 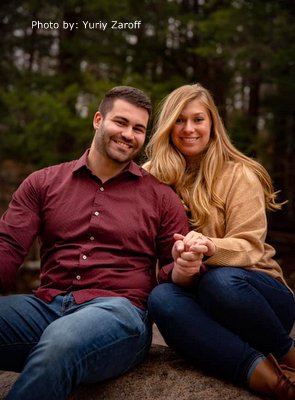 Blaine Guido, age 26, says he has always believed there is a reason why things happen. Now, however, he says he has come to a greater understanding of what that reason is.

“The teachings of the Church and God kind of filled in the gaps for me,” he says.

Blaine was among more than 70 people from around Maine who, despite the challenges of the COVID-19 pandemic, participated in the Rite of Christian Initiation of Adults (RCIA) and were welcomed into the Catholic Church this Easter. Blaine was baptized, confirmed, and received first Eucharist at St. Mary of the Assumption Church in Augusta.

“These last few months and the inquiry process were awesome,” he says. “I have had a great experience.”

It’s an experience that began after he met Kelly Macomber when they were both students at Thomas College in Waterville. Blaine says he did not have much guidance in the faith growing up, although his mother, who had a Quaker background, would often tell him that there is a piece of goodness or a piece of God in everybody. Kelly, on the other hand, grew up having the Catholic faith as an integral part of her life.

“My father is a remarkable man. He definitely took the time to instill in us that faith was important and that it should be a guiding light,” she says. “He set such a positive example by praying through everything. OK, something not’s going right. Let’s say some prayers about this. He actually was diagnosed with non-Hodgkin’s lymphoma cancer, and it was pretty serious for a while, but he never slowed down. He would say, ‘OK, let’s pray about it.’ He was very strong and consistent in faith, so when troubles hit, that was just our first answer.”

She says the example he set stuck with her, and her faith has remained the rock upon which she leans.

“It’s just nice to know that you have that, no matter what is going on around you,” she says. “I often think, if I didn’t have this safe place, this peace of mind, I don’t know how I would cope with this. It’s something that I’ve worked hard not to take for granted.”

Knowing how important faith would be to a future marriage, when she dated, Kelly looked to find someone who shared similar beliefs. Then, she met Blaine.

“Blaine comes along, and I fought it for a little while. I was like, ‘I don’t know. This isn’t a sure thing. I don’t know if he’s going to be supportive with raising the kids Catholic down the road, especially him not being Catholic. I don’t know if he’s going to invest in this marriage from a spiritual standpoint,’” she says. “It took me a while to come to terms with that, but then, I kind of remembered that God wouldn’t have sent this to me if it wasn’t meant to be. So, I expressed to Blaine early on that it was important to me.”

“She told me how important faith was to her, and I basically told her, ‘I’ve got no experience in this.’ So, she invited me to go to Mass with her and her dad one Sunday, and I told her, no expectations, but I’ll definitely go with you and see what it’s all about, and we just kind of continued to go.”

“What really resonated with me was what the priests were saying,” he says. “I remember walking out and saying, ‘Hey, that was really impactful.’ I think that was the start of me saying that I wanted to learn more about this.”

Describing himself as an analytical person, he says it was important for him to understand why things were being done.

“I just kind of mentally broken down the Mass and said, ‘Why do you do these certain things?’ And I just kept listening and understanding how the pieces fit together,” he says. “I did a lot of research on my own. I would actually talk with Kelly’s father periodically, and if there was something difficult going on, I would always hear him say to Kelly, ‘Pray about it. It will make a difference.’ That really resonated with me that he had such a strong faith, and he is definitely someone that I really respect.”

Also there to guide him was Kelly.

“She said, ‘I’m never going to push you to do it, but I’ll always direct you and help you find the answers for the questions that you’re asking,’” Blaine says.

Kelly says Blaine assured her he would be fully supportive of raising any future children in the faith, so she became more confident in moving forward with their relationship. Then, one day, he told her he wanted to participate in RCIA and become a member of the Church.

“Once we had talked about moving forward, that’s when I started realizing that it needs to be a part of my life, for me and for future kids and family. I guess I didn’t realize how important it was until I saw it, because I had never had it before,” he says.

Heading into RCIA, he say he was concerned that it would be a rigid process, but that didn’t turn out to be the case.

“It really wasn’t. It was really focused on being introspective and understanding why I feel a certain way,” he says, “It was really helpful to look at different areas and then connect them to my life.”

“As cradle Catholics, we kind of take for granted sometimes the knowledge that comes with our faith, and I definitely did take that piece for granted. So, it was nice to be able to have a second chance to learn about the roots and why we do this, and why this is important, and what this symbolizes,” says Kelly. “You don’t realize the gift you’ve been given.”

A particularly moving time for Blaine was participating in the Rite of Election at the Cathedral of the Immaculate Conception on the first Sunday of Lent. During the rite, parishes present to the bishop and the community those seeking to enter the Church, and their godparents affirm their readiness to continue their journeys. The names of catechumens, those like Blaine who were not previously baptized in any Christian faith, are then enrolled in the Order of the Elect.

“I was sitting in the cathedral in Portland and Deacon Jeff [Lewis] was there and basically said, ‘This is our home church. This is our church. Don’t worry. You’re home.’ That really resonated with me. Being there with the bishop and just being recognized and welcomed in the Church as part of the elect was a really special moment for me,” he says.

Throughout Lent, Blaine and Kelly prepared for his baptism, as well as for their wedding, which was scheduled just two weeks after Easter. It was a season spent with one another and with God, now an important part of both of their lives. He says every night before he left Kelly’s house for his own, they would pray together.

“We say the Our Father every night and a Hail Mary,” he says. “In my office, I keep a small book. It’s called The Saints’ Little Book of Wisdom, and basically, I can flip through the book and say that today I’m praying about forgiveness or suffering or joy. Then it gives me little lists there of different prayers.”

Blaine says his journey to the Catholic Church has already changed his life, and he is looking forward to building upon that.

“I’ve seen a lot of changes, but now, I think the biggest part of it is going to be Kelly and me being together, being able to share our faith together in a home-built family,” Blaine says. “I think what Deacon Jeff said about being in the cathedral right now, that this is our home church - this is home - I think that’s kind of the answer. It makes me feel like this is where I belong. This is home.”

“It means something that I really can’t put into words,” says Kelly. “It means a lot that we’re on the same path and that we’re working towards the same goal and that he now has the same support system and peace of mind that I was so lucky to be raised with.”