That is how Hallie Pike, a 17-year-old from Jay, describes her relationship with God.

“I just cherish every moment that I get to grow in that relationship with Him,” she says. “I hope I never lose it, because it’s a beautiful thing.”

Throughout her life, Hallie says she has tried to stay true to what she believes God wants for her, because she knows following His path will take her where she wants to go.

“He has a plan for my life. I know He does, and it may not be what my plan is. I may have a different idea, but I know His plan is right,” she says.

Hallie says her relationship with God is continually growing stronger, through prayer, adoration, retreats and, most especially, by attending Mass.

“Mass is beautiful. I love Mass. I love going to Mass. I get excited to go,” she says. “I think being a tabernacle of God and receiving His body, it’s almost like a personal, physical relationship with Him. You read about His life through the Bible. You go to adoration and He is in your presence. But at Mass, you receive Him. I think that’s the biggest reason that He feels so close.”

Hallie says she has always regularly attended Mass, from the time she was a child sitting in the front pew with her grandmother.  She says she is grateful to her family for giving her and her siblings that foundation.

“Always getting taught through them about the faith and about how important it is and how to cherish it throughout my life,” she says. “They taught us through reading the Bible, of course, and teaching us different prayers, learning the rosary.”

She says not only did her parents make sure she and her siblings attended religious education classes, but what they learned often became the topic of discussions during the ride home or around the dinner table. 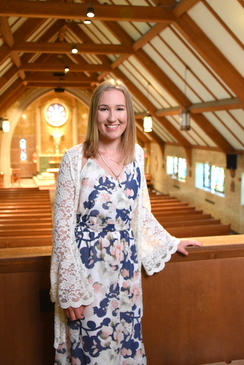 “Actually using that information and teaching us how it connects to our lives and to us, ourselves, how we could grow upon each little thing we learned,” she recalls. “There really wasn’t any structure to it. It was just picking out something that looked important and just talking through it.”

Hallie says it helped her understand that faith is something that should be integrated into her everyday life,

“I think it made me realize as a young kid that faith was going to be my life, be important throughout my life, all the way,” she says, “I think that, through my prayer life and through my family life, I am able to not separate things, not make school, school; church, church; music, music. I think I am able to tie it all together.”

“It’s the idea that her faith isn’t compartmentalized, hiding in the church,” says Father Paul Dumais, pastor of St. Rose of Lima Parish, which Hallie attends.  “Many times, young people think and many people think that faith limits your scope of involvement in the world, but it actually broadens it.”

Hallie is a leader both at school and at St. Rose, where she sometimes reads at Mass, is seeking to become an extraordinary ministry of holy Communion, and has long been an altar server.

At school, Hallie serves as a student representative on the school board, plays tennis, participates in the robotics club, plays clarinet, and is a member of the National Honor Society, and the Tri-M Music Honor Society.

Hallie is a talented clarinetist.  She has been chosen first chair four times for the Kennebec Valley Music Educators Association Festival and first chair the past three years for the Mid-Maine Youth Orchestra. She was also selected to participate in the Maine All-State Music Festival.

Hallie shares the gift of her music with her church and the community.  She has played the clarinet at Masses, including at Christmas and Easter. It has meant trying to master some difficult pieces, including Gregorian chant.

“Some of them, when he (Philip Fournier) handed them to me and said we’re going to be doing them next week, I was like, ‘Oh, my gosh.’ The page was black almost because there were so many notes. They were difficult pieces, but they were so beautiful and so meditative, and that’s where I started to really connect my faith and music together.  I realized as a young kid that my music was a gift from God, and I should use my gift for the benefit of others, but that’s where I really was able to connect it together and bring it to the Mass and just have beautiful music for people to meditate on, for people to listen to, and to make their experience better.”

“Those are skills that, when transferred to sacred music, are a great blessing,” says Father Dumais. “When it’s someone like Hallie, who plays with skill but also plays with devotion, who has a recognition that these gifts are from God, it is a kind of prayer.”

As one of the Tri-M Music Honor Society officers, Hallie says she has encouraged all members to share their music with others.

“Our goal is to get out in the community and help everyone else,” she says.

For Hallie, that has led to performing at nursing homes.  She says a concert she and a friend gave at Christmas especially touched her heart because more and more people kept coming in to hear them play.

“We just played these little duets, and I would take song requests every once in a while,” she says. “I was doing stuff from ear. Someone suggested a Christmas carol that I had never heard of before, so they sang it for me, and I just played it. It was so much fun that I didn’t want to leave. I said, ‘Oh my gosh, this has to become a tradition.’”

She also recalls when she and fellow bandmembers played at Maine Veterans’ Homes in South Paris, where her grandfather was a resident.

“My grandparents hadn’t heard me play in at least a year because they weren’t able to get out, and he died a week later. I will always treasure that moment because, to have that opportunity, I will never, ever be able to say how much it meant to me.  And it was the last time my grandmother heard me play, too, because she died seven weeks later. I was overcome with joy at how happy I was that I got to play for them.”

Hallie has also taken part in many other service activities either through the school or the church.  She volunteers at the food pantry when possible. She has volunteered at the Special Olympics held at Mt. Blue High School in Farmington. She has sorted and folded clothes at the Free Store, located in the parish hall. She helped to put together Thanksgiving baskets for area families and prepared meals on Thanksgiving Day. 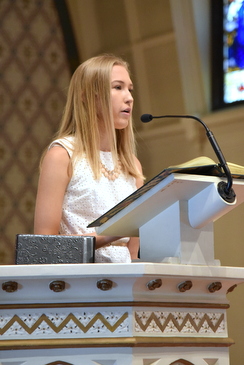 “To a family, that made their holiday, and if I can do something that simple that means so much to someone else, sign me up. It gives me a sense of joy. I get goosebumps when I think about it. We’re not changing the world, but we’re helping. Little things are what are needed, little random acts of kindness,” she says. “God has made every person beautiful, and some people’s lives are harder than others, and I feel that, as a Catholic, I should help others.”

Hallie says she is following the example set for her by her family and by parishioners she watched while growing up. Now, she hopes to be that example for others.

“Seeing it as an example as a child, I wanted to grow up and be that example for kids who are younger. I feel like I have a place, also, as an older sister, to show my siblings and other kids around that it’s not hard to help. It’s not hard at all. It’s important that we don’t just focus on our own life,” she says. “Life isn’t simple, and sometimes, it’s not intended to be simple, and we can’t always just think of ourselves. No one is going to get anywhere with that.”

Hallie admits that as a teenager attending a public school, it’s not always easy to live out her faith.

“Being one of the only Catholics in school is very hard. It’s never been easy, ever, and sometimes I struggle with it.  Sometimes, I mess up, and I realize it later, and it pains me. I just pray about it after and say, ‘O.k., Lord, even though there aren’t other Catholics to go on this journey with me, help me to stay true to you and stay true to what I believe in and not let me undermine it or underestimate your power and your will.’”

Still, she says, she doesn’t hide that she is Catholic and when opportunities arise, she looks to share the joy of her faith with others.

“Sometimes, just sharing with a friend, ‘I heard this really good thing at Mass today, do you mind if I talk to you about it?’ Even if they’re not Catholic,” she says. “And sometimes, when I go to daily Mass, I’ll say, ‘Oh, I can’t go to this tonight because I have daily Mass.’ And, I talk about how much I love it and show them how beautiful of a thing it is. There are just little things you can do that show how much you care about your faith.”

When she first attended N.E.W., she says, “I felt like I grew more in that week than I grew in six years.” 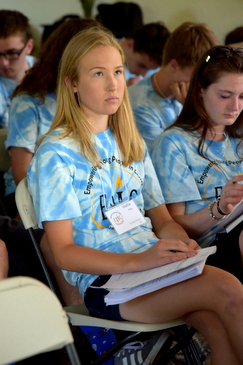 She says E.P.I.C., the successor to N.E.W., then helped her “to come back to the church and be more of a leader and be willing to speak to other people when I see something that could be beneficial. And honestly, there were things I was able to take back into my school life and into my family life,” she says.

The retreats, especially that first year at N.E.W., also led to some lasting friendships, which gave her a peer support network.

“I became friends with these four girls, and after every retreat, this group has grown, and it became this groups of 25 kids. We have this little group chat together, and we’re able to talk with each other. Whenever anyone has a prayer request, you text the group chat and ask, ‘Will you guys pray for me right now?’ It has been phenomenal,” she says. “You can see me smiling because those are some of my closest friends. They’re amazing.”

Her work on CYLT and her service to her church and the community also resulted in her receiving a St. Timothy Award, presented by the diocese to teens who live as disciples of Christ.  In nominating her, Penny Laverdiere, youth ministry leader for St. Rose of Lima described Hallie as “a very moral person who will not compromise her faith. She is reverent, kind, honest and always looking for ways to help others.”

“I was just overjoyed,” Hallie says about the award.  “It was overwhelming to see the amount of people saying, ‘congratulations’ or ‘you deserve this.’ Obviously, you don’t feel like you deserve it.”

Hallie is entering her senior year in high school.  While she is just beginning to think about colleges, she says it must have a strong Catholic community and preferably a good music program.

Although she knows there will be struggles ahead, she’s confident her daily conversations with God will keep her on track.

“It’s my best relationship,” she says. “I know He will lead me in the right direction as long as I listen to Him.”