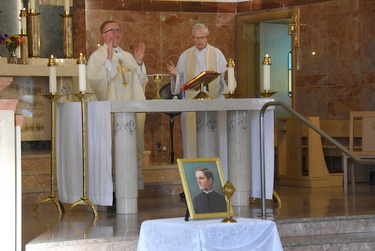 Members of St. Thomas Council 13861 of the Knights of Columbus joined with parishioners of St. Thérèse of Lisieux Parish in Sanford on Friday, August 13, in celebrating the Feast Day of Blessed Michael McGivney.

Father McGivney was beatified on October 31, 2020, making this the first opportunity for members of the Church in America to celebrate the August 13th feast day of the founder of the Knights.

“Today, we have this great joy of celebrating an American Blessed. As a parish priest, he is a patron and should be a model for all of us of holiness, of charity, of service of neighbor,” said Father Alexander Boucher, during a Mass celebrated at Holy Family Church in Sanford.

Seeing the struggles of the poor and marginalized in the community, Father McGivney founded the Order of the Knights of Columbus in the basement of St. Mary Church in New Haven, Connecticut, in 1882. Despite being a member of the clergy, he insisted that the fraternal order be led by the laity, envisioning it as a community where laymen would become brothers, who would serve others and support one another. 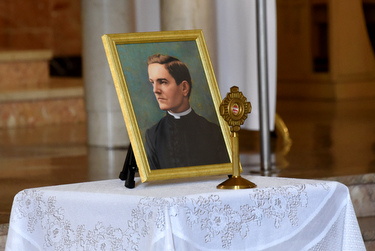 “He saw the poor. He saw the widowed. He saw the orphaned. He saw the Catholic minority, the persecuted Catholics, and decided, with a group of assembled parishioners, to do something about it, motivated out of love,” Father Boucher said.

“Father McGivney was a priest ahead of his time who recognized the potential for the laity to actively participate in the mission of the Church. Holiness is not simply for priests and religious; rather, each one of us is called to become a saint and to proclaim the Gospel in the world around us,” said Kevin Neely, while leading an hour of prayer following the Mass.

Father McGivney died during the pandemic of 1890, just day days after his 38th birthday. Although he was no longer present to shepherd the fraternal order he founded, it continued to grow, reaching not only across the United States but to other parts of the world. There are now more 16,000 Knights’ councils, including 70 active councils in the Diocese of Portland, made up of 7,300 members. Father Boucher is among them. 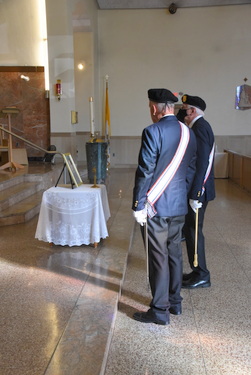 “One of the first things that I did after turning 18 was to join the Knights of Columbus as a college student at Catholic University, and it was in that group of young men, led by our council chaplain, that I came to discover the great fraternity that could come from being assembled together with a particular mission. The Knights of Columbus, united in charity, unity, fraternity, and patriotism, served as a guide for me throughout my college years and helped me to discern a vocation to the priesthood. I’ve been inspired by the example and the witness of Father McGivney,” Father Boucher said.

During the Mass and hour of prayer, a relic of Blessed Michael McGivney, a piece of his priestly cassock, was displayed at the foot of the altar along with a picture of him.

Prayers were offered during the Mass and the prayer hour for Father McGivney’s canonization. For him to be declared a saint, a second miracle must be attributed to him now that he has been beatified.

Father Boucher also took the opportunity during the Mass to express his gratitude to the Knights of Columbus for the many ways in which they serve the community.